One hundred prospective new trainees have resumed their two-week AB course at training sites in Waikato, Northland, Taranaki, central South Island and Southland within the last month. Training first started in March of this year, but was impacted by the Alert Level 4 lockdown guidelines imposed during this time.

The training process is an intense two-week course with attendees having to pass the first week before moving onto the second week. Initially, trainees work on artificial cows to make sure the insemination technique is learnt. The introduction of artificial cows by LIC in 2015, with silicon parts that have been made to resemble as close as possible the internal reproductive organs of a cow, is an initiative that has lifted the overall AB apprentice technician pass rate in recent years.

If a trainee passes this course, they will become an apprentice for 12 months with LIC and will go on to do AB in the spring with a senior technician who will guide and mentor them on the intricate processes on how to manage their own AB run. During this time, LIC monitor their NRR (non-return rate) and trainees also complete some NZQA papers relative to their work. If they obtain an acceptable NRR, and complete their papers, they qualify for a NZ Certificate in Artificial Insemination of Livestock, meaning they can become an AB technician for LIC. 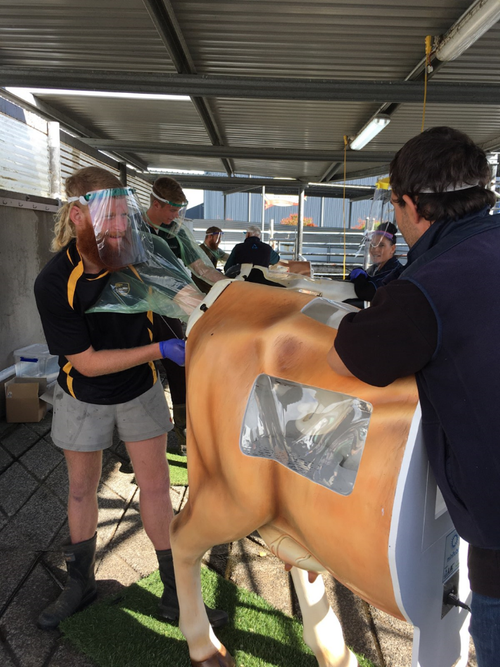 The new-recruits will become part of a team that inseminated over four million cattle last year, resulting in ~ $300 million genetic gain annually. Three out of every four cows in New Zealand are sired by LIC bulls, making the role of LIC’s AB technicians not only important to individual farmers, but critical to improving and preserving the country’s dairy industry.

So who is a typical AB technician?

LIC’s National Artificial Breeding Manager Dave Hale says the role attracts people from all walks of life who are connected by the same passion for improving New Zealand’s dairy industry.

“Most of our trainees have some farming background, but it is not a prerequisite. They do need to show an affinity to animals, passion, resilience, attention to detail, good communication skills (written and oral) and a willingness to succeed.

“Most of all, they realise the importance of the dairy industry to New Zealand and are passionate about doing their bit to ensure its success in coming years. The calibre of this year’s new trainees is very high with people from across the country and a good split of men and women.”

New recruit Lucy Aston, from Taupō, says that she loved her time as an assistant technician last year with her sister, and is looking forward to getting started again this year.

“I’ve been in the agriculture scene for a while as a casual shepherd, so I have a real passion for the industry. I love the seasonal nature of the job, and despite it being only for a short time, you get a real sense of just how important this work is from your interaction with farmers.”

Over the last 12 months, LIC has also invested in a new purpose built training facility in partnership with Silver Fern Farms at Te Aroha which will allow more training options to be provided within the North Island and ensure the ongoing success of New Zealand’s critical dairy herd.