Each year about 900 of LIC’s qualified AB technicians (AB techs) visit farms in their local area, artificially inseminating thousands of cows between September and January.

Their aim? Getting them pregnant to continue-on in their farmer’s milking herd and produce the next generation cow.

LIC’s AB technicians are paid at a piece rate meaning they get paid for every insemination they complete so good money can be made in a relatively short period of time. However, it’s dependent on experience, ability, the amount of time they’re able to work and where they live in New Zealand. It’s a varied and rewarding role that attracts people from all walks to life and LIC is now seeking recruits for the coming season.

The ability to earn extra money in an industry he loves was a strong motivator for one long-serving LIC AB tech Paul McCarthy, who first trained in 1978 as a 20-year-old (seeking to supplement the income he was earning as a first-time sharemilker). He’s now been working for LIC for nearly 40 years. 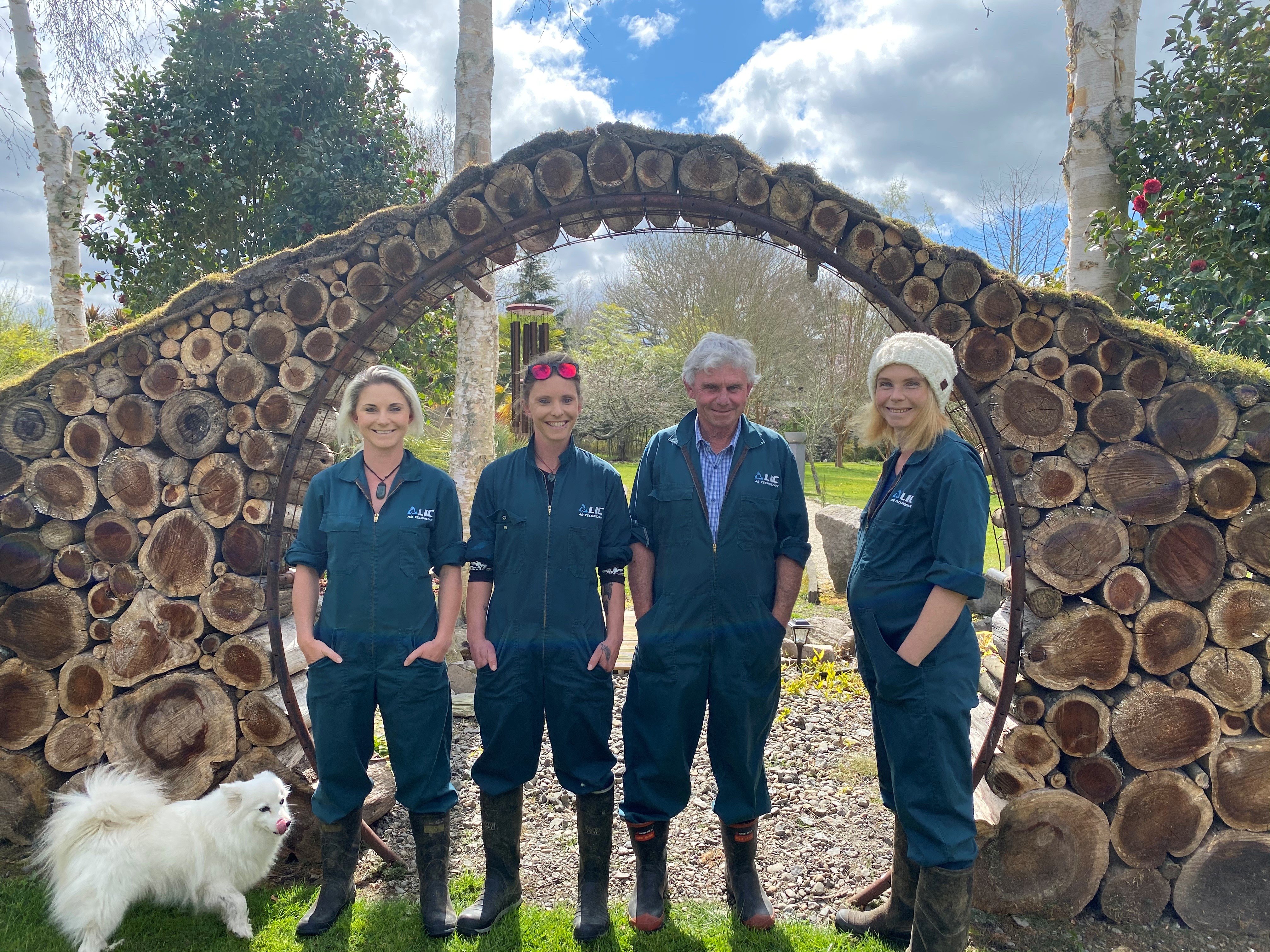 Left to right with dad Paul McCarthy are daughters Laura, Anita and Erin.

Paul and his wife Johanna own a 134ha dairy farm in Galatea in the eastern Bay of Plenty but Paul retains his work as a seasonal AB tech because he loves it, and because it’s somewhat of a family vocation.

“My brother-in-law works as an LIC AB tech near Ashburton, with the job becoming and even bigger family affair since my three youngest daughters – Anita, 31, Laura, 30, and Erin, 28 – all fully-qualified as AB tech’s with LIC about five years ago.”

Paul says that there is financial gain to be made, however it’s no easy ticket getting there, especially if you’re working two jobs as Anita and Erin are.

“Laura only just got through because there’s a height and length-of-arm criteria for the job. But she just got in and did her apprenticeship in the South Island where you’re dealing with large Friesians and she was able to inseminate those big cows. She’s a very determined person.”

Trainees go through an initial two-week training course with LIC which includes working on an artificial cow and a visit to a freezing works to work on live animals. Next comes working as an apprentice for an entire mating season. If results are successful (and cows fall pregnant), the trainee then gets a group of farms to service themselves, with close support and monitoring by LIC’s team of AB supervisors and senior mentors.

“It’s only the AB techs who are genuinely passionate about their job that succeed, and they’re generally the same ones who carry good empathy for dairy farmers,” Paul says. “All young AB techs I know are immensely proud of their role in the dairy industry.

“But it’s not the easiest thing to learn. It’s hard on your arms and hands. It can be very frustrating and there are plenty of times you’ll ask yourself ‘what am I doing this for?’ but then one day it all clicks. Once you’ve got it, and you’ve handled the pressure of training, there’s a lot of pride there; it makes you feel good.” 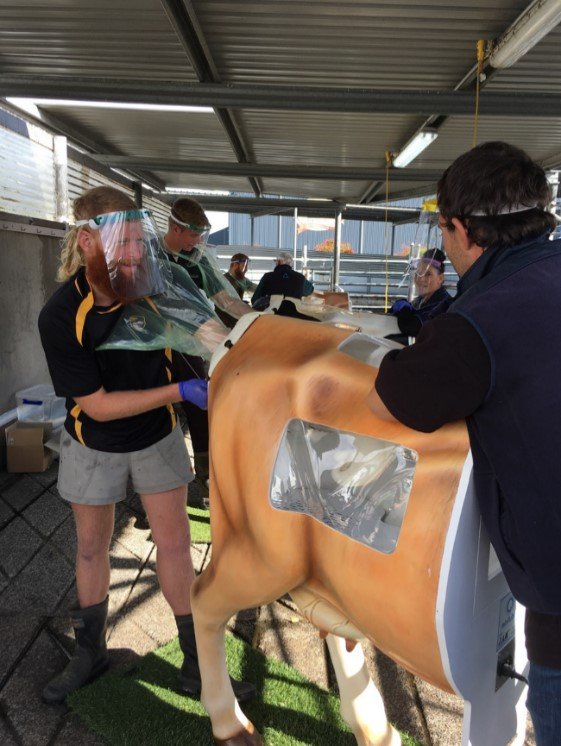 Trainees with an artificial cow (pictured above)

Once trained AB tech’s can return to their role the following season, after taking a break over the Christmas and New Year period. Many do other essential work in the agriculture sector, or travel and work overseas in the interim period (although not under COVID-19) where New Zealand LIC trained and qualified AB techs are highly regarded.

New Zealand’s AB techs are the best in the world Paul believes saying the skills learned are easily transferable overseas, for those eligible to work abroad.

“I inseminated in Australia last year and New Zealand techs are in demand over there, as they are everywhere. Our adherence to hygiene, our training, our technique – it’s all outstanding. LIC should be proud as well, and they are.”

Skills needed to do the job include an ability to relate well to farmers (people skills) and attention to detail. “You should know how a cow thinks, and for townies that’s something they need to learn on the job, but that comes with training and time on-the-job.

“It’s something of an art, so it’ll come naturally to some but for others it’ll take a while to get going and some won’t get going at all as they find it is just not their cup of tea or they are unable to pass the required apprenticeship programme. It’s a specific procedure you’re doing, and it’s very black-and-white: you’ve either inseminated her or you haven’t, and you have either got her in calf or you haven’t. You need to have true confidence in what you’re doing.”

Find out more about becoming an LIC AB technician.