Drop of milk is due diligence

Whether it's bad news or a signal of resounding success, what's possible from a drop of milk is ultimately good for the continued viability of the farm. 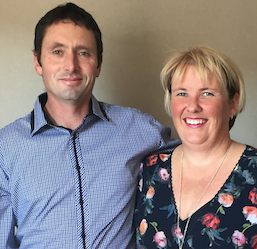 Not to mention a good dose of peace-of-mind.

That's the story of Southland farming couple Rachel and Carl North, who are strong advocates for the convenience of regular herd tests and what their cows' milk is telling them.

"The cows are our major assets, and that's the way we've always viewed them since our sharemilking days," Rachel says. "Herd test information is really important to us, because we use it to monitor and manage the cows' health.

"Somatic cell counts aren't a problem for us, and we want to keep it that way. We don't have any need to do blanket treatment because when we get the report with all the high somatics on, we deal with the issue immediately by targeting the treatment with the vet."

While somatic cell counts haven't been a problem for the Norths, a more sinister problem has haunted them in the recent past.

"When we bought the herd we had a major Johnes problem, and we were losing anywhere between 30 and 50 cows a year.

"Then we found out about the Johnes test, using the herd test milk. It was quite scary for us, because at first  we got a long list of high-positives, positives, and suspects.

"In the first year we culled all the high positives and positives, and we kept the suspects because of the inkling we might cull a healthy cow. Of the suspects we kept, they all came up positive over calving and we lost them all."

The Norths now immediately cull all their high-positives, positives, and suspects.

"It's heart-breaking, it's really hard  to stick a cow on the cull truck when she's in supreme condition, doing 2.5kg milksolids, she's fed, she's pumping, but you know she's got Johnes: She's got no future, and she's going to do damage to the herd."

Rachel says there's good reason to hope the disease is no longer an issue.  "This year our Johnes test results came back with no cows affected.

"But we'll keep testing - for us it's invaluable. We'd rather any affected animal is found out and culled humanely rather than have her get to the clinical symptoms of this awful disease and die a horrible painful death."

The Norths are big fans of herd testing for another reason.

"The milk pregnancy test is so simple, non-invasive, and convenient. It's huge value for us because the cows aren't having to stand on the yard for up to half a day, being non-productive in the heat - and it's not normal for them to be doing that, so they can get distressed.

"Last year was our first year doing milk pregnancy testing, it was amazing because the results just came through the post or email - we never had to take the cows out of the paddock, it just happened.

"Any of the suspects we had - because of the way the dates fell - we just got the vet in for them."

Aging the pregnancies isn't an issue, Rachel says, because her husband Carl is disciplined with mating recordings, and dates are self-evident.