He’s a dairy farmer with a passion for breeding, striving to be “at the front of the game.” She’s a converted city-girl who fell in love with the dairy farmer, despite her aversion to typical milk.

It doesn’t agree too well with my system,” Stacey White says.

“I used to have soy and almond milk and I’ve tried both them and rice milk; nothing’s really appealed in terms of taste, and baking with those substitutes doesn’t really work either.”

So when Stacey became aware of A2/A2 milk 18 months ago, she tried it out and found it tasty, creamy, and, crucially, easily digestible.*

“I’ve become quite passionate about it.”

Coincidentally, husband Brendan was at the time pondering his herd’s future.

“Breeding is forever changing,” he says.

“Years ago the family farm was all-Jersey, but we started toward the black cow because it was producing something others wanted to buy. Now there’s a swing back to Jersey because of the price we’re getting for fat. It’s hard to produce the next generation of cow – how do you know for certain what people are going to want?”

The question loomed large because a developer was expressing strong interest in purchasing Brendan and Stacey’s Te Kauwhata farm, which milked 650 cows. 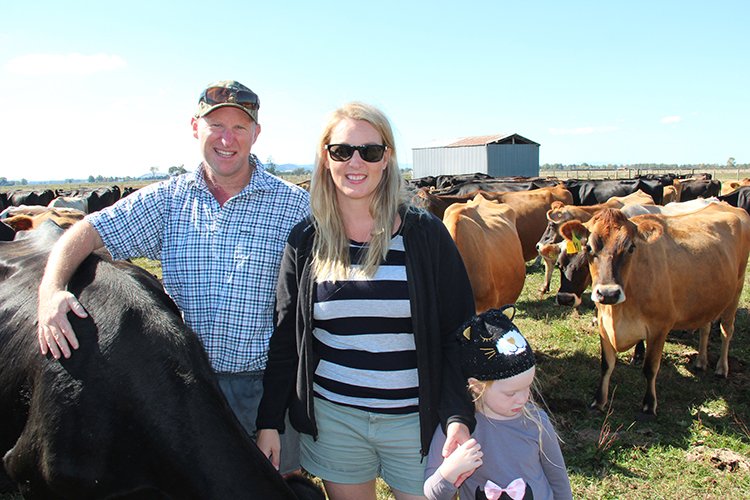 There was an opportunity to move to an Orini farm, near Gordonton, but that meant downsizing to a 120 ha farm, capable of supporting just 380 cows.

“At the time A2/A2 hadn’t really come on my radar,” Brendan says.

“If we moved I knew we’d need to split the cows and sell quite a few, and the breeder in me said ‘we’ll simply take the best we’ve got’ – and that was the focus initially (Brendan and Stacey’s cows have traditionally been in the top 1% of the national herd in terms of both Breeding Worth and Production Worth).”

Soon enough, however, Brendan heard Synlait was to set up a dairy factory in Pokeno, and headlines indicated increasing market awareness, and continued future growth, of A2/A2 milk.

“I knew Synlait was strong in the A2/A2 market in Canterbury,” Brendan said, “so the stars were beginning to align for us.”

So, without any confirmation or contract signed, Brendan and Stacey began their A2/A2 journey.

It began in earnest merely 18 months ago.

“I talked to Tam (Tamara Findlay, LIC Agri Manager) about it, and asked ‘what does the testing look like, what are the timeframes, etc’. We decided to commit to getting our entire herd (GeneMark) G3- profiled, which equated to 900 animals including our young stock.

The capital outlay was upward of $30,000, with each animal costing $36 for a G3 (DNA) profile, together with confirmation of whether they possessed the A2/A2 allele.

“From that we took the A2/A2 portion of the herd.”

“The end-goal for us was that we would be on this farm, supplying Synlait, and getting a premium for our milk.”

But anyone involved in the industry during the past 20 years would know that change is inevitable, Brendan says.

The uncertainty caused some anxiety for Brendan and Stacey.

“I thought, heck, we’ve gone down this track and tested all the animals, DNA’d the herd, it’s cost us upward of $30k, and for what? We were a little deflated.”

With the 2018/2019 season underway at the time, Brendan hadn’t sold his remaining stock, which was still being milked at the former Te Kauwhata property (on land yet to be developed).

So he turned around and brought some of the top-performing, non-A2/A2 cows, to Orini.

Since then, more change.

“So it makes sense. For the cows that turned out to be A2/A2, the test has cost us $36 per cow, and we’re seeing an extra return of $90 for those cows in the first year,” (Brendan concedes the $36 for cows that don’t turn out to be A2/ A2 is a cost, though the benefits of a full DNA profile remain).

Brendan and Stacey are excited about their first season milking an exclusively A2/A2 herd, which begins in the shed from calving time.

*Disclaimer: Some consumers are willing to pay more for A2/A2 milk because they believe it prevents the digestive problems they say they experience after drinking A1 milk. LIC does not necessarily endorse any of these claims.

LIC offers the following to any farmers considering breeding toward, or milking for supply, A2/A2 cows.