Confirmation of the importance of conformation

It’s essential LIC shareholding farmers get access to the most elite dairy bloodlines – genetics that both deliver on the national breeding objective (breeding worth, BW) while resulting in easy-care cows that last within the herd

The LIC breeding scheme does its utmost to do justice to the above; the common fundamental is one of balance.

The over-arching guideline that LIC’s bull acquisition team relies on is the cooperative’s Livestock Selection Index (LSI). Although closely aligned to the index (BW), the LSI allows the ability to allocate various weightings to different traits, such as udder conformation, for example.

Alongside factors within the LSI, weightings on conformation and shed traits are allocated, including:

Dam selection: Using LIC’s extensive database, animals are narrowed down for possible contract matings. Thousands of three-generation pedigrees are viewed in the ‘hunt’ for the next potential bull dam, all of which fall within set criteria for breeding values (BV), and which will meet conformation thresholds.

Dam inspections: Final selection of contract animals takes place in January and February. The bull acquisition team inspect as many of the in-milk cows as possible to ensure conformation looks suitable. Selection staff are qualified TOP (Traits Other than Production) inspectors. The team is mindful of animals that ‘have it all on paper’, but don’t measure up when it comes to visual inspection. Importantly, it’s during these on-farm inspections that feedback from breeders is canvassed (e.g. how the potential dam rates in terms of workability traits, such as temperament and milking speed).

Mating allocations: LIC’s sires of sons are carefully selected. Given the potential influence these bulls have, it’s imperative the ‘best of the best’ are identified. Making the grade as a sire of son demands a high LSI, and a desirable balance of traits including conformation breeding values.

Bull dam inspections: One year on from allocated matings, bull calves hit the ground. Of the 1700 that are genomically screened, about 230 are short-listed. Once making the short-list, bull dams are inspected/ re-inspected by bull acquisition staff.

Genomics: The value and benefit of genomics escalates every year. Conformation BV’s that start out as ancestry-only values are enhanced with genomics. Re-rankings occur, which ultimately impacts selection decisions.

The graphs below illustrate a few of the traits that have been emphasised by LIC since 1996, and how the trait values have tracked across each cohort within LIC’s Sire Proving Scheme. 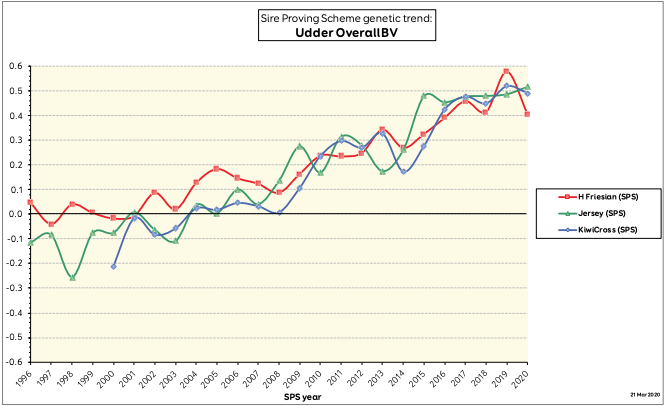 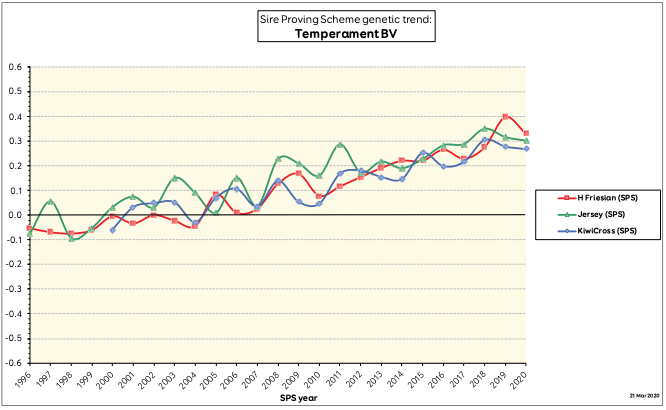