A cow's body condition score is a visual estimate of her body fat reserves which can be used to indicate her current and future feed requirements, health status and likely productivity. 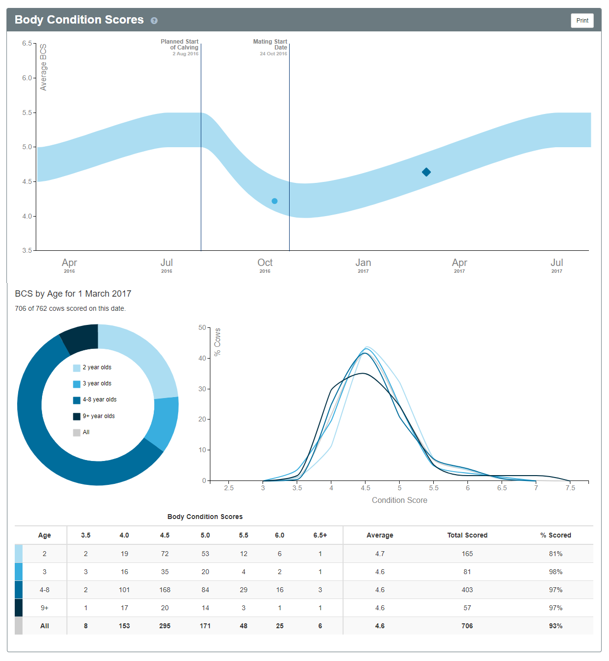 The most important times to body condition score cows are pre-calving, pre-mating, mid-lactation, late-lactation (to help with dry off decisions) with the aim to achieve BCS targets at calving.

A BCS scale of 1 to 10 is used in NZ (where 1 is emaciated and 10 obese).  At least 70 randomly selected cows should be scored at any one time to provide an accurate BCS profile of your herd.

How to read the graph

This graph shows the average BCS of cows scored in your herd for a 15 month period leading to Planned Start of Calving.

The blue diamond depicts the average BCS of cows scored on the date currently selected.

The solid blue circle represents the average BCS of a sample of 70 or more cows.

The empty blue circle represents the average BCS of a sample of less than 70 cows.

The shaded band is the target based on cows achieving BCS at calving of 5 - 5.5 and losing no more than 1 BCS between calving and mating (targeting BCS 4 - 4.5 at planned start of mating). Cows are unlikely to gain any BCS in the month leading to calving.

Click any point on the graph to see the distribution of BCS for that date by age in the graph below.

Young Stock (under 22 months of age) body condition scores are excluded from these graphs.